In the wake of the COVID-19 pandemic, GFA pastor Yaphet and other GFA missionaries have marched to the fringes of society to bring help and hope to people in despair, people such as Callon and Sada. Their most demanding adversary? Hunger.

Fear of starvation drove Callon to take on debt they couldn’t afford and drove Sada to forage in the forest for food. They were desperate, for themselves and for their young daughters, to survive.

Before the pandemic, Callon and Sada worked multiple jobs to earn a humble income that would provide for their two young daughters. With no land of their own, Callon worked as a daily labourer. Sometimes he left home for months at a time to earn a better living in the city as a construction worker. Other times he worked at a local brick kiln two or three times a week. When his earnings at the kiln weren’t enough, he’d travel four miles to the forest to collect firewood. He would then haul the firewood more than six miles to the market in a neighboring village to sell his load for less than $3.

Sada also contributed to the family’s income, but her job as a field worker was only seasonal. When the planting or harvesting season ended, so did the opportunity for income.

Still, the family was content and happy. Their girls regularly attended school, and their needs were met. 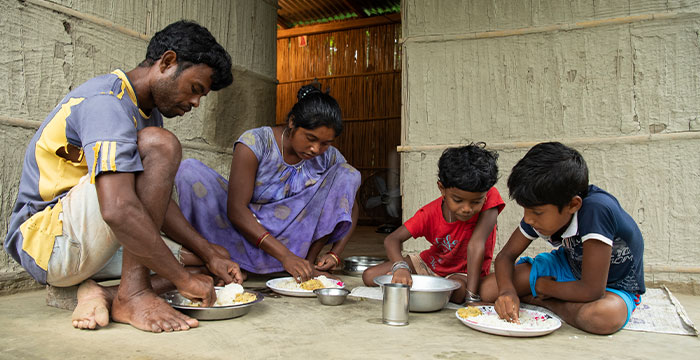 Desperate to feed his family during the pandemic, Callon bought rice on credit.

Then the COVID-19 pandemic shook their world, as it did the world of many others around the globe. Many governments instituted various levels of lockdowns in an effort to curb the virus’ spread. Millions lost their jobs as “the ongoing crisis . . . disrupted labour markets around the world at an unprecedented scale,” says the World Economic Forum.1

The effect was particularly devastating among the world’s poor—such as daily wage labourers like Callon and Sada—in the developing countries of Asia and Africa. These workers often live below the poverty line and commonly struggle to feed their families. They and other groups, such as women and those who have little to no education, were more likely to immediately lose their jobs.2 Callon abruptly had no way to provide for his family. He, like many others, had little to no savings to fall back on. The blow left scores of families reeling financially, pushing at least 97 million additional people into poverty.3

In many areas, shops closed and travel became restricted, adding to the difficulties in attaining food. Travel restrictions prevented Callon from going to the city, where he had previously earned twice as much as working at the local brick kiln. Construction had ceased anyway. The brick kiln closed, offering no work or income. He couldn’t even sell firewood—he wasn’t allowed to go to the forest, and the market was closed.

What was he to do? He couldn’t just let his family starve.

“We didn’t have any food at home, and those days my husband was not able to earn money and bring food home. ... That happened several times ... And even right now we are going through that difficulty.” 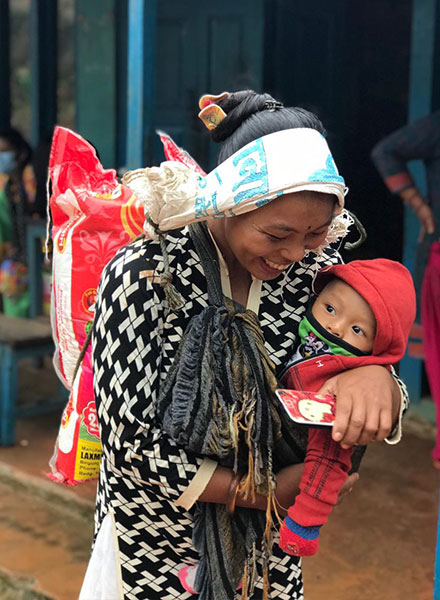 A woman joyfully receives a bag of rice at a GFA relief event.

It was a predicament many of the world’s poor found themselves in. According to the United Nations, “The pandemic is impacting food systems globally and pushing the world’s poorest and most vulnerable people toward greater food insecurity.”4 Numerous parents listened helplessly to children’s cries of hunger, many fearing starvation more than the virus.

Callon had to do something. Out of desperation, he bought rice on credit. It would put him in debt, but at least his daughters could eat.

“I feel very bad when I remember those days,” Sada recalls. “We didn’t have any food at home, and those days my husband was not able to earn money and bring food home. ... My husband had to get rice on credit ... That happened several times, and the situation was very bad then. And even right now we are going through that difficulty.”

The family continued to struggle. Their poverty enabled them to obtain wheat at a discounted price from a government shop, but they had no way to grind it, so they bartered a portion of the wheat to a mill owner. Sada got more seasonal work, but it was insufficient due to the pandemic and poor rain—and she was paid mostly in rice. With no money to buy vegetables or cooking oil, Sada searched in the bush for wild leaves to add some nutrition to their rice.

Then one daughter got sick with jaundice. Callon and Sada had no money for her treatment. They sold three small chickens to raise the funds, but it also drained their few resources.

“[The pandemic] has caused so much pain and grief,” Callon said. “It has caused fear and anxiety in every heart, and I’m very much worried about it. But then, on the other hand . . . being a believer, I submit everything into God’s hand.” 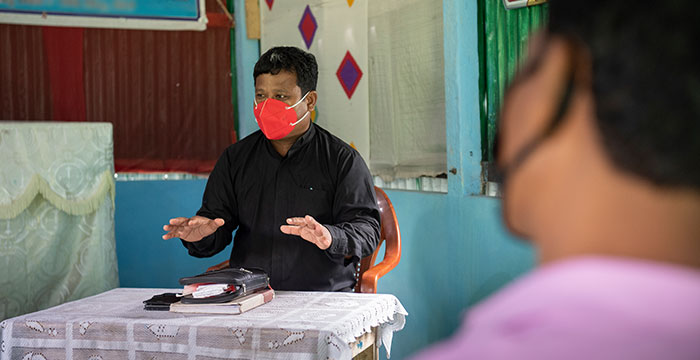 Burdened by the plight of those in his community affected by the pandemic, Pastor Yaphet met with church leaders to determine how they could help.

GFA pastor Yaphet, who has served the same community for 25 years, saw this family’s plight and was burdened with a desire to alleviate their struggles—and those of all the people in his community. He has been a continual source of help and encouragement during the pandemic and has devoted much personal time and attention to the believers entrusted to his care: visiting families as allowed under the restrictions, holding small worship gatherings in various homes and encouraging believers to trust in the Lord. This care has motived believers spiritually and encouraged them amidst the hardships they face.

“During this pandemic . . . fellowshipping with believers and praying to God gave me strength and courage to continue even though we were gripped with fear,” Sada said. “Our pastor continued to nourish us, continued to guide us, continued to spend time in prayer and help us.”

Callon was also grateful for the pastor’s compassionate care and continued involvement in their lives. The couple has been encouraged by the church’s care for both their spiritual and physical needs. In addition to spiritual nourishment, the church has offered practical help in this time of crisis, giving away essentials such as rice, blankets and mosquito nets.

“During this pandemic . . . fellowshipping with believers and praying to God gave me strength and courage to continue even though we were gripped with fear,”

“[It] has been a great source of encouragement and help for each one of us,” Sada said. “During this time, [the church has] distributed so many things to us. ... And it meant a lot to us because [we were] not able to buy groceries and food because we [didn’t] have money, and we [were] running very low. Our food at home [had] almost run out, but then [the] church [gave] a lot of help to us ... We are very much encouraged and happy that in the times of need and difficulties the church gave us what we needed the most.”

A Privilege to Help 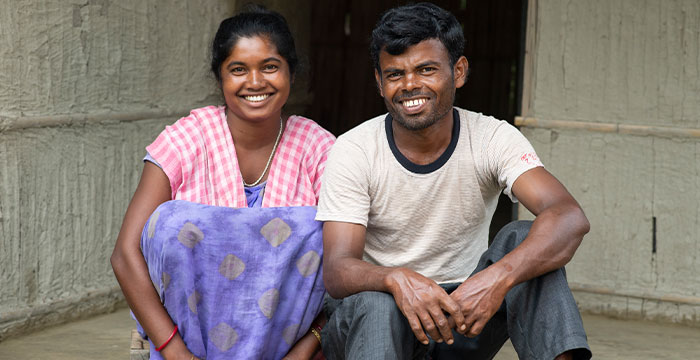 GFA pastor Yaphet has helped Callon and Sada immensely during the pandemic, offering hope in time of despair.

Many believers in Pastor Yaphet’s congregation have contributed to helping people in need.

“[God’s Word] talks about and teaches us to love your neighbour as yourself,” said Pastor Yaphet. “[The believers] are very cooperative when I share that we need to help people who are in need. ... They open their hands and give as much as they can. Although they do not have much, but whatever they can they are giving us to help.”

This attitude has been prevalent throughout the body of believers where GFA serves; entire congregations have been involved in distribution efforts. Individuals handing out help and hope have included men, women, youth and even children. They have counted it a privilege to help those in need and love others in the name of their Savior.

Time and time again, a now-familiar scene has unfolded as GFA missionaries have provided aid during this crisis. Eyes full of hunger and void of hope have filled with renewed vigor, gratitude and sometimes tears of joy at the receipt of relief items. And it’s an effort Sada agrees must continue.

“It is very important for the church to extend that helping hand to not only the believers but to everyone who is in need,” Sada said. “When the church extends a helping hand to them and tries to meet their needs, like by giving them rice and food and clothes … these are means of expressing God’s love to these people. I think it’s very essential for the church to continue doing what it is doing.”

You Can Help Feed the Hungry

Though many have been helped, the need persists. There are many men, women and children still reeling from the effects of the pandemic. They are struggling just to survive, reaching desperately for a lifeline. When Jesus saw the hungry multitude, He responded with compassion, feeding the people in their time of need (see Matthew 15:32-28). You can join the efforts to offer the hungry people of Asia and Africa help and hope in their time of need.

Provide Help and Hope to Families in Need

Your gift can make a tremendous difference. It provides urgently needed food and other humanitarian aid to men, women and children in desperate need, all in the name and love of Christ.